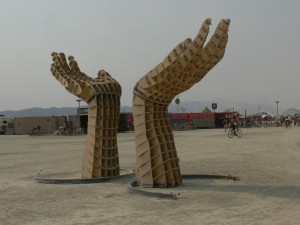 What would inspire folks to shelve their iPhones and computers for a week, wait (with extraordinary patience!) for long hours in line to camp out in a severe desert environment, pack in all food and water, and pack out all trash, enduring dirty fingernails and dusty feet?  An annual event called Burning Man with these elements, and more, brought over 60,000 such folks together this year in a remote Nevada desert.  The rules for the community are basic (and can be see in their entirety here: http://www.burningman.com/).  In my reading of them, they are essentially a pragmatic statement of the Golden Rule (do unto others as you would have them do unto you.)  A unique element of Burning Man is its gift-based, rather than consumer-based economy.  The only things for sale are ice and coffee, and the proceeds go to a charitable organization.  Everyone that comes is expected to give something.  Also part of this culture: extraordinary creativity, art, loud music, a markedly friendly and open/permissive atmosphere, and whimsical clothing (or sometimes none.)

A group of people who love Christian Science felt there was a good reason to be a presence in this city.  We came to wash feet. 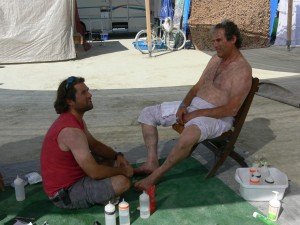 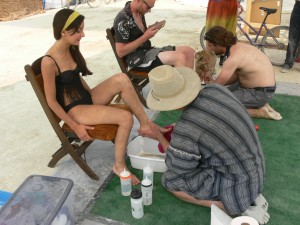 We hadn’t specifically set out to “do church” there at Burning Man.  We had planned to lovingly embrace that city of lively seekers by actively seeing their spiritual worthiness as we washed dust from their feet.  What a surprise that in doing so, we discovered we were in the middle of church!  We found that as people came to us for this simple, humble, and very useful service, some were just happy to have clean feet.   Many, however, were curious as to why we would be doing such a thing.  Some remarked on its Biblical roots.  Quite a few pursued it further, wanting to know about Christian Science and its founder, Mary Baker Eddy.  Every single recipient left happy and refreshed, some profoundly so.

Here are some things I learned about church in this simplified, windswept desert environment, church pared down to its core essence:

Walls are entirely optional.  Someone could look at our camp and say we had a  “church structure” consisting of a large white dome tent, a generous and lovely shade structure, some chairs on rugs, and an impromptu outdoor kitchen set up between two vans.  However, the real “structure”, that which gave foundation and shape to our days, was much more aligned with Mrs. Eddy’s definition of Church in Science and Health:

“CHURCH: The structure of Truth and Love; whatever rests upon and proceeds from divine Principle.    The Church is that institution, which affords proof of its utility and is found elevating the race, rousing the dormant understanding from material beliefs to the apprehension of spiritual ideas and the demonstration of divine Science, thereby casting out devils, or error, and healing the sick. ”

Though we had no permanent walls, our community still had a very useful and specific form.  About half way through the week, we noticed these passages from the current Bible Lesson on Christ Jesus, supplied a perfect set of “Bylaws” to guide us in properly structuring our actions:

“What we most need is the prayer of fervent desire for growth in grace, expressed in patience, meekness, love, and good deeds. To keep the commandments of our Master and follow his example, is our proper debt to him and the only worthy evidence of our gratitude for all that he has done. Outward worship is not of itself sufficient to express loyal and heartfelt gratitude, since he has said: ‘If ye love me, keep my commandments.’ ” (Science and Health with Key to the Scriptures by Mary Baker Eddy, p. 4:3)

“Let unselfishness, goodness, mercy, justice, health, holiness, love — the kingdom of heaven — reign within us, and sin, disease, and death will diminish until they finally disappear.”  (Science and Health with Key to the Scriptures by Mary Baker Eddy, p. 248:29)

“…Be ye all of one mind, having compassion one of another,  love as brethren, be pitiful, be courteous: ” (I Peter 3:8)

When a community is firmly committed to loving neighbors, they begin to love each other more, even if they have widely differing “styles”.  We began the week not knowing each other, of different ages, with different life-experiences, and widely differing approaches to sharing our love of God and man.  Despite this, we came to love, appreciate, and trust one another.  This doesn’t mean there were not opportunities to exercise patience and forgiveness!  It just meant our default became “Love one another”.  In this simplified church environment, it became clear to me that there is no dividing line between helping someone you don’t know and helping someone you do know.  There is only love.  It has one divine source, and it gets expressed freely and appropriately to everyone.  Paul said in his letter to the Corinthians, 1 Cor 13:3, translated in The Message: “Trust steadily in God, hope unswervingly, love extravagantly. And the best of the three is love.”  We practiced humble, extravagant love, felt it for each other, and were able to offer it to folks we did not know.  I also saw in a sudden insight the converse: what shrivels church is not some dark outside force.  It is my own entertaining of unchristian thoughts towards another. 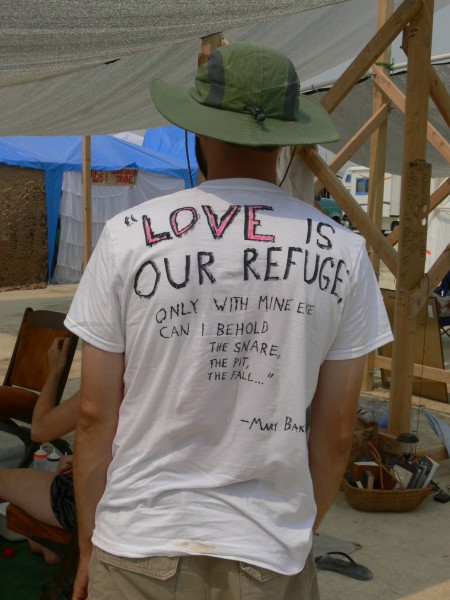 There is room in church for whatever gift folks have to offer. There is not just one right way of washing feet.  There is not just one opening question to ask.  There is not just one way of meeting needs or nourishing a hungry heart.  We found that the diversity within us met the diverse needs of the folks that appeared.  Often the people that sat at the open chairs, ready for clean feet, were met with the one best suited to meet their needs.  Each washer had a gift to give, and each gift was as unique as his own smile.  What qualified the giver was his or her love, willingness, and commitment to humbly wash feet, not how much or how long they had studied the letter of Christian Science.  The essence of our little community’s offering was a tangible sense of nonjudgmental, unconditional love, and everyone in our camp, regardless of where they were in their study and practice of Christian Science, was included in both the giving and receiving.  Every expression given in love had value, and every camp member was valuable.

Shifting our focus from counting feet to enabling gratitude let us thrive.  At first, we wanted to know how many people we were assisting, so we invited them to write their names on a sign.  It quickly became apparent this numbering was the wrong approach, so we changed from trying to keep track of numbers to inviting gratitude.  (Don’t number the people! Mrs. Eddy warned in the Church Manual, and we found that was sound counsel at Burning Man, too.)  The gratitude poured out eloquently as folks happily expressed their delight in felt pen on our wooden shade structure. 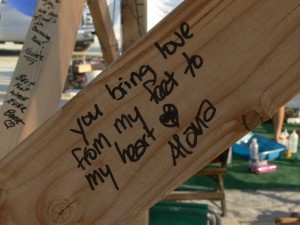 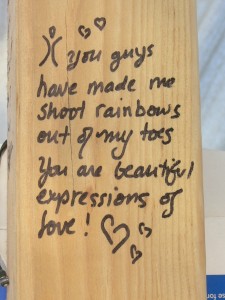 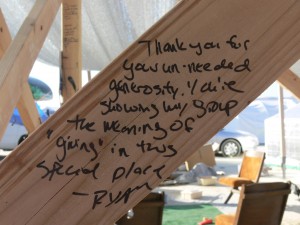 Unconditional love is so attractive that an inevitable side effect of love and inclusiveness is growth!  We anticipated we would be a camp of ten people.  Immediately, before we even got through the gate, we had the opportunity to include rather than exclude, when we were approached by two teens who asked us if we would drive them through the gate.  (They had tickets, but needed a car to ride in.)  They were so grateful and happy we were willing to help them, that they joined our camp, pitching their tent next to ours.  One of them joined us for multiple meals, participated in our camp activity, and contributed by getting ice.  After the Christian Science lecture given by Fujiko Signs (a member of our camp the entire week along with her husband Mark), one listener wanted to hear more, so he came to our camp after the talk, had dinner, asked questions, joined us at our testimony meeting, and brought his tent over.  He joined our camp for the rest of the week.  Another visitor, a student of Christian Science, heard we were there, found us, and asked if she could use our “Reading Room”, a card table set up in our dome tent, which she did.  Thereafter she was a frequent visitor and foot-washer.  So we began with ten, but had grown essentially by another third by the time the week was out.  This expansion was unlooked-for… but how love attracts!

Church tangibly harmonizes.  True church is not passive.  It acts on and through us as we lift our highest concept of God and man.  This is what we witnessed repeatedly in that arid environment.  One example:  two women came into our camp, noticeably disturbed.  As I began washing the first one’s feet, her language was harsh.  But she and her companion seemed very glad to be in our peaceful company, and they stayed quite a while.  I learned that one whose feet I had washed was trying to help the other, Irina, a young lady from eastern Europe whose English was minimal.  Irina had gone running that morning and had completely lost her camp.  She had no idea where it was in this town of dusty-look-alike-streets, therefore had no food, water, extra clothes, or bed for the night.  Irina had her feet washed, too, and then joined some others in “moving with gratitude”, an activity that a group in our camp was doing then.  Irina’s friend then washed feet of one of our members as they two talked together.  Since lunch was approaching, we included them in our round of sandwiches. I remembered I had found a stray water bottle on the playa the night before, so I washed it, filled it with fresh cold water, and gave it to Irina along with a bag to keep it in.  Both ladies beamed as they went on their way, now refreshed and happy.  One said, “I came here burdened by many things, but am leaving without any of them.”

By the end of our week in the desert, we found we had a full-service church.  We had gathered for a Wednesday testimony meeting, including multiple new-comers; held an open-air Sunday church service, with folks listening and participating, coming and going; provided two well-received Christian Science lectures; read the Bible Lesson out loud, with some discussion as one might have in a Sunday School setting, including the visiting college student; provided and utilized a simple “Reading Room”; washed feet; offered comfort, hope, joy, purity, and Christian Science treatment when requested, as well as food and drink; even provided some Christian Science nursing care.  Around fifty or so took Science and Health home with them from the desert, inspired by its amazing message. Our presence was a purifying, elevating one, and there was definitely healing. 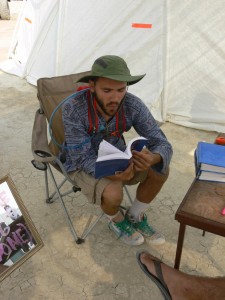 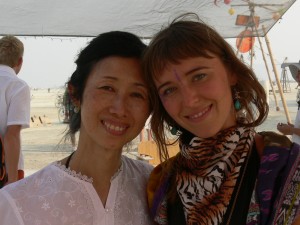 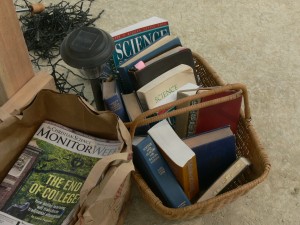 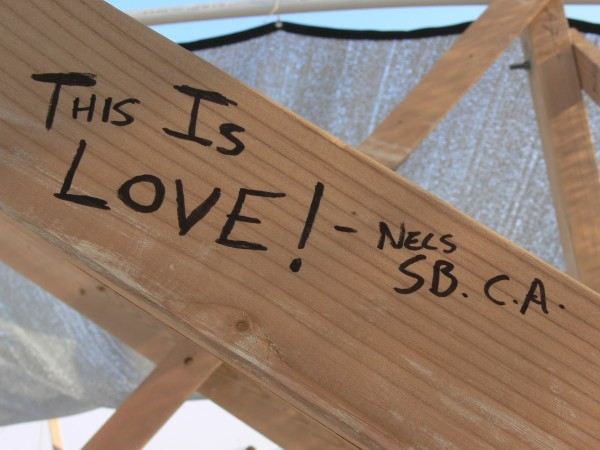 I am pondering how I can take what I have learned to apply more in my own life and in my somewhat greener and less-dusty church-home.  Love more, judge less.  Include.  Simplify.  Wash feet.  Feed.  Love. 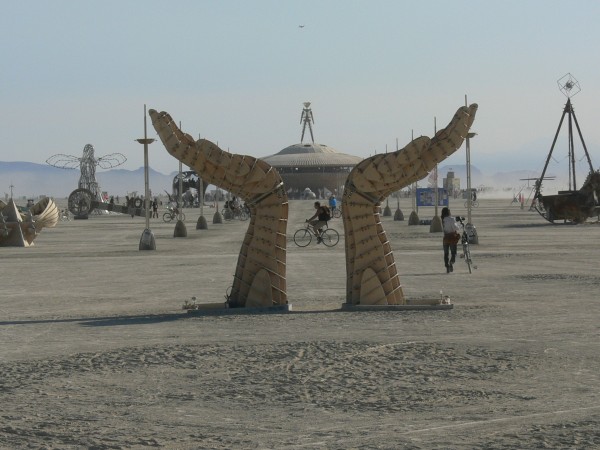 To learn more about the Christian Science foot washing camp at Burning Man in 2013, visit spiritualplaya.org.

This entry was posted in News. Bookmark the permalink.